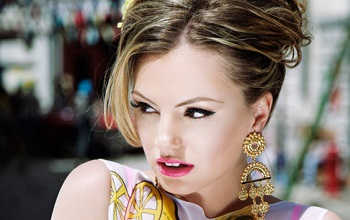 Alexandra Stan (born 10 June 1989 in Constanța) is a Romanian singer and songwriter. She made her chart debut with her single, “Mr. Saxobeat”, which was written and produced by both Marcel Prodan and Andrei Nemirschi. They have previously discovered her at a karaoke bar in 2009 and offered her a contract with their own label, Maan Records, through which Stan also released a promotional single titled “Show Me The Way” and her debut single, “Lollipop (Param Pam Pam)”. “Mr. Saxobeat” quickly achieved commercial success in her native Romania and aboard, with it reaching the number one spot of the Romanian Top 100 and topping the record charts in nine other countries, including Germany, where it became the first Romanian song to top the chart since O-Zone’s “Dragostea din tei” (2004). Worldwide, “Mr. Saxobeat” has brought total sales of over 10 million shipments. Stan’s next single, “Get Back (ASAP)” reached number one in Slovakia and the top ten in Romania, Hungary, Finland and Czech Republic. Following this, Saxobeats was made available for purchase as her debut studio album to digital stores over the world, including the United States and Canada. It reached number 15 in Japan and sold over 68,000 copies in that country.

Following a violent incident between Stan and Marcel Prodan in 2013, Stan’s last album under his label, Cliché (Hush Hush), was released. It was a Japan-only reissue of Saxobeats with the addition of three songs intented for her then-untitled sophomore studio album, “Cliché (Hush Hush)”, “All My People” and Lemonade”; the latter one was successful in Italy. Subsequently, Stan signed a new record deal with Fonogram Records and made her second studio album, Unlocked, available for digital download on 27 August 2014. Six songs from the record were released as singles, while “Dance” peaked at number 25 on the Japan Hot 100. Another release off the album, “Give Me Your Everything”, aroused controversy upon the release of its music video for a scene in which Stan is wearing a white robe with masonic symbols inscribed on its back. Critics named the clip “her most bizarre video ever”. As of January 2015, Unlocked sold more than 17,000 shipments in Japan, where it peaked at number 21 on the Oricon Albums Chart. ~ discogs

Ask the price of Alexandra Stan and availability for free at info@room5.agency