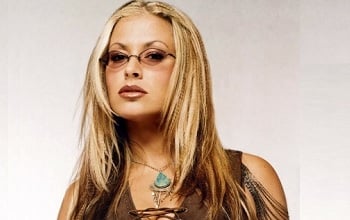 Anastacia (US)
Left Outside Alone, I’m Outta Love, Paid My Dues, Sick And Tired, Not That Kind, One Day In Your Life, I Belong To You

Raised in New York City, Anastacia came from an entertainment-oriented family: her father was a singer; her mother an actress in musical theater on Broadway. Despite being diagnosed with the chronic intestinal illness Crohn’s disease at age 13, she developed a career as a dancer, appearing on Club MTV and in such music videos as Salt-N-Pepa’s “Everybody Get Up” and “Twist and Shout.”

In 1999, she was a finalist on the MTV talent contest show The Cut, which attracted the interest of record labels. She signed to the Daylight custom label of Sony Music’s Epic Records and recorded her debut album, Not That Kind, which was released internationally in 2000.

The result was massive success: the album reached the Top Ten in eight European and Far East countries, selling over two million copies. At home, the single “I’m Outta Love” became a dance hit, paving the way for the release of a revised version of Not That Kind in the U.S. in March 2001.

A year later, she was creating a buzz in America. She joined Mary J. Blige, Cher, Shakira, and others for VH1’s fifth annual Divas Live showcase in May 2002. She made her proper American debut with Freak of Nature in June. A self-titled album followed in 2004, with the compilation Pieces of a Dream: Best Of arriving a year later.

After making a successful foray into fashion with her own clothing line in 2006, Anastacia returned to music in 2007 and a year later released her fourth album, Heavy Rotation. Another break preceded 2012’s It’s a Man’s World where she spent time in 2009 touring with LuLu for the Here Come the Girls tour and then her own headline shows in 2010. The album saw Anastacia go back to basics with her powerful voice mixed with rock-influenced, pop tracks, which included a cover of Foo Fighters “Best of You.” ~ William Ruhlmann

Ask the price of Anastacia and availability for free at info@room5.agency