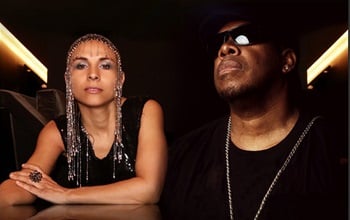 C-BLOCK (DE)
So Strung Out, Time Is Tickin, Broken Wings

They all came to Germany as American soldiers. At first C-Block was only Red Dogg (George Anthony Joseph) and Mr.P or P.O.P. (James White). It was with Mr.P that Red Dogg had success with the album “General Population” and all the hit songs from that. It all went very well for those too. They were the “main members” of CBK that were most visible, but the singer Theresa “Misty” Baltimore and the rapper/singer Goldie were also members of the group and featured on many songs.

C-Block’s first single was “Skake dat azz” together with the rapper A.K.-S.W.I.F.T. It was released in early 1996, and got a lot of airplay in the clubs and hiphop charts.
The real breakthrough came with their single “So Strung Out”. This song hit the top 5 on the very popular chart, Viva Top100, and reached top 10 in many European countries.

The followed up the success with another bomb song “Time Is Tickin´ Away”, and it got as big, if not any bigger than the previous single. If you ask anybody about C-Block, the person probably would mention “So Strung Out” and “Time Is Tickin’ Away” directly.
After that it was time for the debut album release. “General Population” hit the stores, and this album is one of the, if not the greatest album of the history of the European HipHop/Rap scene. The album contains, except for the 3 singles “So Strung Out”, “Time Is Tickin´ Away” and their fourth single, “Summertime”, super-songs like “Everything´s Good”, “Being Raised” and “Round N Round”. This is really something for the fans of European Rap & HipHop.
After the single “Summertime”, Mr.P started to think of his own career and he and Red Dogg argued a lot. P wanted too much and he left C-Block…

…so now C-Block became Red Dogg, Misty and Goldie. That was the new C-Block.
It took some months before the first single “Eternal Grace” was released. The song hit the Viva top 10 immediately, and was released for Christmas 1997. In March 1998, the single “Broken Wings” had a world premiere. A cover song of Mr.Mister’s “Broken Wings”, and here Red Dogg really proves how great rapper he is. The first verse of this song has it all. The new album “Keepin´ It Real” was released in May 1998. This album has a little more hiphop influence, but still the typical CBK-style. The songs “Bounce”, “Keepin It Real”, “Motherless Child” and definitely the great “We Believe” and “You Win Again” are worth checking out.

The second album was a big success, especially in the middle-european countries and Bulgaria, hitting for example nr 1 spot in Poland.

Ask the price of C-Block and availability for free info@room5.agency