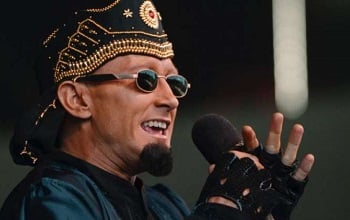 Dr. Bombay, the most well-known alias of Jonny Jakobsen (born 17 November 1963, Malmö, Sweden), was a Taxi driver, curry-munching, tiger-chasing Indian from Calcutta. Dr. Bombay fits into the Bubblegum Satire category, due to his parody of Indian society. Dr. Bombay is best known for his hit songs “S.O.S. (The Tiger Took My Family)”, “Rice & Curry” and “Calcutta (Taxi Taxi Taxi)”.

Under the alias of Dr. Bombay, Jakobsen first introduced his unique style of dance music that has made him famous throughout the world, most specifically in Japan and, surprisingly, India and Asia.

In his lyrics, the character is portrayed as an Indian taxi driver, mystic, sitar player, chef, snake charmer and avid fan of elephant racing. He appears clad in traditional Indian garb, such as a kurta and pagri, with the addition of dark glasses that are also worn by the other characters portrayed by Jakobsen.

Two of Dr Bombay’s songs have appeared in the Beatmania IIDX series of video games, and one of them appeared in Samba de Amigo, as well as numerous eurodance compilations.

Johnny Jakobsen’s music style can be described as bubblegum dance with a twist. Each of his aliases – Dr. Macdoo and Carlito – have a unique style, that is based on their heritage. Dr. Bombay’s sound makes use of instruments such as drums, rattles, and other instruments which can be seen as being typical of Indian culture.

Ask the price of Dr. Bombay and availability for free info@room5.agency