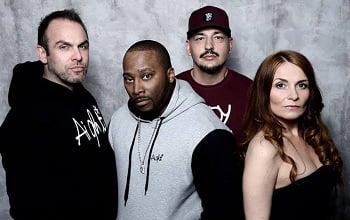 Fun Factory (DE)
Close to You, I Wanna B with U, Doh Wah Diddy, Celebration, Take Your Chance

The group was founded in 1992 along with four founding members Balca Tözün from Turkey, Rodney Hardison from America, Toni Cottura and Stephan Browarczyk from Germany. They released their first singles “Fun Factory’s Theme” and “Groove Me” in 1992 and 1993. They shot a music video for “Groove me”. Fun Factory released their debut album Nonstop! The Album in 1994. Before their third single release “Close to You” in the late of 1993, lead singer Balca Tözün had been replaced with Marie-Anett Mey, an entertainer from Paris, France.”Close to You” became their first chart success peaking no. 1 on the Canadian Dance chart. Follow up singles were “Take Your Chance” and “Pain”, which peaked at nos. 18 and 24 respectively on the German Singles Chart.

In 1995, the band released their Singles “I Wanna B with U”, “Celebration” and the Manfred Mann cover version retitled and shortened “Doh Wah Diddy”, all chart hits, peaking at nos. 11, 12 and 6 on the German Singles Charts. The same Year, Fun Factory released their second Studio Album Fun-Tastic. By this time they began to become more popular throughout Europe and even saw some of their songs to Chart in the United States and Canada. The follow up single release was “Don’t Go Away”, becoming their last chart success. “Don’t Go Away” was also the last single to be promoted by the band as a quartet, when Cottura left the band. As a trio, the group released two more further singles, the ballad “I Love You” and “Oh Yeah Yeah (I Like It)”. The first of these was dedicated to the leaving member Cottura at the end of the music video, while no video was made for the latter, due to their sudden disbandment in 1997. This is why on the “I Love You” single version, the first rap verse by Cottura was re-recorded by Browarczyk, which became his first and yet only solo Rap verse in a Fun Factory single. In 1996, Cottura started releasing some solo singles and founded the hip-hop and R&B collective and record label, Booya Family, where he produced tracks for a variety of artists including NANA, Pappa Bear, Ray Horton, Jonestown, A.K. Swift and Alex Prince. He also produced Tracks for the Boy Bands *N Sync and Backstreet Boys.

Ask the price of Fun Factory and availability for free info@room5.agency