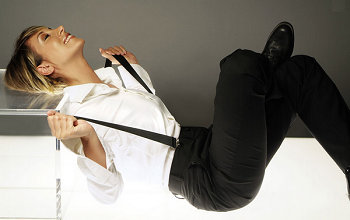 Ingrid’s artistic path started with painting and acting but soon singing turned out to be her most powerful form of expression. She began performing in piano-bars, musicals and as solo voice with local jazz bands, but soon her soft and unique voice, together with an Incredible capacity of interacting with her audience during shows brought her to meet the famous dance music producers Larry Pignagnoli and Marco Soncini. They offered Ingrid to write the lyrics and sing their brand new tune, and soon “Tu es foutu” came to life. The track broke all records of airplay on Italian networks and immediately became an international hit.

After the huge success of her first album “Rendez vous” Ingrid starts an endless number of tours all over the world, and after more than ten years she’s still considered one the most talented artist in the dance-music panorama.

Ingrid’s huge talent and outstanding capacity of interpreting new roles and suggestions have recently led her career into exploring the word of Pop-Swing almost getting close to Burlesque. Her single “Vive le Swing” in its club remix has reached N.1 position in world chart DJ Tunes.

During the release of “Tu es Foutu 2K12” Ingrid meets the band Réseau who have made the “Original Jazz Mix” e “Chill House Mix” versions of the super famous track. Recently Ingrid’s co-operation with Rèseau has deeply developed and implemented and has finally lead to her new single “Kiki Swing/Kiki La Belle”. The song tells of a magic feminine image, a sort of “silhouette d’amour” whose melodious moves fascinate the whole word. KIKI “fascinated” also the world famous trumpet player Fabrizio Bosso who enhances the song with his unique solo plays.

Ask the price of In-Grid and availability for free at info@room5.agency