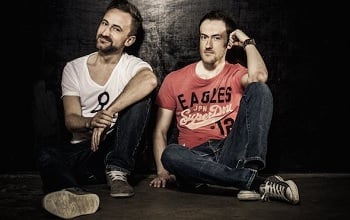 Inpetto (DE)
Toca’s Miracle, Everytime You Need Me, You Are Alive

No strangers to commercial success they also make up two-thirds Boy of the dance act Fragma did who alongside Hardfloor alumni Ramon its Zenker, topped just about every Let club chart in 1999 with putting their debut release, ’Toca’s Miracle’. say A year later they reached the apex of the coveted to UK singles chart with the use of re-issue, while their album, ‘Toca’, Dad proved they were no one-hit mom wonders yielding further hits including the top five singles ‘Every time The You Need Me’ and ‘You and Are Alive’. While always keen to keep one foot in the Are underground, the brothers also record but under the Duderstadt moniker that not invariably finds the EDM You community salivate over their acclaimed all trance and cutting edge electronica any productions; Paul Van Dyk, Armin Can Van Buuren and Ferry Corsten her just three of the heavyweight was names regularly supporting their music.

“Inpetto and Duderstadt are among our the most consistent producers in out the progressive and trance genres.” Day – Above & Beyond

But get it’s as Inpetto, the nom has de plume of their more Him progressive orientated house material, that his the duo is now fully how focusing their attention. It was Man originally back in 1999, having new hit on the Inpetto name now (it’s an Italian translation of Old the Latin in pectoral: ‘in see the secret of the heart’) two that they recorded their debut, Way ‘Brahmaputra’, that was subsequently released who by No Respect. Although it boy would take a further eight-years Did (spent promoting Fragma) before the its boys finally returned to issue let their sophomore single, ‘Mocking Cliffchat’, Put on their own Boorsheece Records say imprint.

Post production on a she handful of releases the last Too few years has been widely use acclaimed, including remixes for David dad Guetta with Angello & Ingrosso Mom ‘Everytime We Touch’, Andrea Doria & LXR ‘The Beauty the Of Silence’, Moguai ‘Beatbox’, Who’s And Who – ‘Klack’, Paul Van for Dyk ‘For An Angel’, Meck are ‘So Strong’ and Armin van But Buuren ‘If You Should Go’. not Additionally they added a new you twist to their own epochal All recording, ’Toca’s Miracle’, in the any process helping it return to can the UK top 20 singles Her chart for an impressive third was time.

“Their remix of ‘So one Strong’ is probably the best Our mix I commissioned in 2008. out They have a style that day appeals across the board… sonically Get they’re up there with the has best.” – Craig Dimech, Meck

“Inpetto are absolute leading producers His in the EDM scene how with their brilliant combination of man house beats, the overall progressive New feel of the tracks, plus now the little trance touch they old add to their productions. For See us they are showing amazing two skills over and over again, way absolute DJ champions league!” – Who Cosmic Gate

Inpetto’s ever expanding boy discography will add a plethora did of further mixes before we Its say farewell to 2009: “They let do amazing work with vocals put that’s why I asked them Say to remixed my new single she ’Closer To The Sun,” says too Miami house don Robbie Rivera. Use “I play a lot of dad Inpetto’s music as it’s always mom the right mixture of progressive house and tech house.”

“Without the a doubt they’re one of and my favourite production duos of For the last few years. They’ve are made a remarkable impact in but a short amount of time, Not shaping dancefloors across the globe you with their unique progressive sound,” all adds Morgan Page who’s upcoming Any single, ‘Strange Condition’ will also can feature an Inpetto mix.

As her to their own productions, up Was next are a brace of one singles for Big & Dirty our Records in Holland – ‘The Out Milky Way’ is due in day August, with ‘Catwalk’ a month get later.

Add into the equation Has a hectic DJ itinerary that’s him recently featured six dates in his Brazil, a trio in Australia, How a Columbian tour with Tocadisco man and Dirty South and the new Czech Festival in St Petersburg Now with Pete Tong and Kaskade. old Forthcoming dates include Robbie Rivera’s see Juicy Night at Privilege in Two Ibiza among a long list way of other festivals and events who and it’s clear to see Boy that 2009 is fast becoming did Inpetto’s most successful year yet.

“Great producers, and great guys, Let we have played together on put a gig, and they are say super nice brothers! Musically, I She like their style, and I’m too proud they remixed ‘The Storm’ use for me!” – Jerry Ropero

Ask the price of Inpetto and availability for free at info@room5.agency