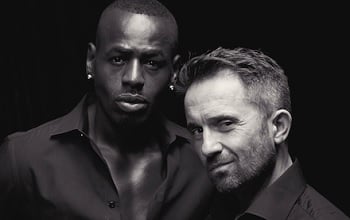 Jason Phats and vocalist Ben Ofoedu are Phats & Small, one of the standout DJ and production pairs of their generation. The Brighton duo first formed in 1999 and featured Russell Small, and since they have clocked up many air miles playing all over the world.

Their most ubiquitous hit, of course, was ‘Turn Around’ which is still a big draw on dance floors the world over. With its breezy vocals and infectious drums and sample of Toney Lee’s “Reach Up”, the single was a huge smash that sold millions of copies, with to they play all sales of their music going past the five million units mark. Singles such as ‘Sun Comes Out’, ‘Respect the Cock’, ‘Harvest For the World’, and many others have all contributed to raising their profile around the world.

Now, veterans of the scene with more than 20 years of experience behind them, the pair have played sold-out shows at top clubs all over the world including many of the world’s greatest from Cocoon in Frankfurt to Ministry Of Sound in London. Along the way, they have teamed up with fellow big stars such as Fatboy Slim, Carl Cox, Todd Terry and Arthur Baker.

Now they are as important and influential as ever, and are signed to the Armada label founded by legendary EDM star Armin van Buuren. New material is on the way in 2017 and it is sure to keep these stars right at the top of the pile well into the new year and beyond. ~ mn2s

Ask the price of Phats & Small and availability for free at info@room5.agency