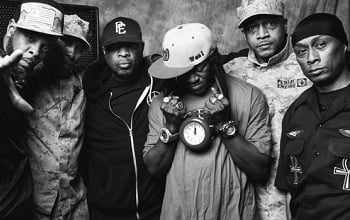 Public Enemy (US)
Fight The Power, Don’t Believe The Hype, 911 Is a Joke, Can’t Truss It

The members of Public Enemy came together at Adelphi University on Long Island, where Carlton Ridenhour studied graphic design and worked at student radio station WBAU. There he met Hank Shocklee (future brainchild of the Bomb Squad) and Bill Stephney (future Def Jam executive), and the trio became fast friends, talking philosophy, politics, and hip-hop late into the night. After rapping over a track Shocklee had created, “Public Enemy No. 1,” Ridenhour started appearing regularly on Stephney’s radio show as Chuckie D. Def Jam cofounder Rick Rubin heard a tape of the rap and started calling Ridenhour.

At first the rapper shunned Rubin, feeling he was too old to begin a career as an entertainer. But he eventually came up with an elaborate plan that involved Shocklee as producer, Stephney as marketer, and DJ Norman Rogers on the turntables. He recruited his Nation of Islam cohort Richard Griffin to, as Professor Griff, coordinate the group’s backup dancers, the Security of the First World (S1W), whose members carried fake Uzis and did stiff, martial-arts moves as a parody of Motown-era dancers. Ridenhour enlisted old friend William Drayton, who, as Flavor Flav, would act as a foil to Chuck D’s more sober character.

Calling themselves “prophets of rage,” Public Enemy released their debut album, Yo!, Bum Rush the Show, in 1987. A more sophisticated version of early East Coast gangsta rappers like Boogie Down Productions or Schoolly D, the group at first went nearly unnoticed except by hip-hop insiders and New York critics. The second album, It Takes a Nation of Millions to Hold Us Back, took the pop world by storm. Reaching Number 42 (Number 1 R&B, 1988), it was immediately hailed as hip-hop’s masterpiece and eventually sold a million copies. Nation contained the minor hit “Bring the Noise” (Number 56 R&B, 1988), which foreshadowed Public Enemy’s knack for controversy, with Chuck D calling Black Muslim leader Louis Farrakhan a prophet. Having referred to rap as “CNN for black culture,” he castigates white-controlled media in “Don’t Believe the Hype” (Number 18 R&B, 1988).

In May 1989, just after the group released “Fight the Power” (Number 20 R&B, 1989), the theme song for Spike Lee’s film Do the Right Thing, Professor Griff, who had previously made racist comments onstage, dropped a verbal bomb. In an interview with the Washington Times, he said Jews are responsible for “the majority of wickedness that goes on across the globe.” Public Enemy leader Chuck D responded indecisively, first firing Griff, then reinstating him, then temporarily disbanding the group. When Griff then attacked his band mates in another interview, he was dismissed permanently. Chuck D responded to the fiasco by writing “Welcome to the Terrordome” (Number 15 R&B, 1990), a ferociously noisy track in which the rapper asserts, “they got me like Jesus.” That lyric fanned the coals of controversy yet again, with Chuck D himself being branded an anti-Semite.

But Public Enemy’s momentum only accelerated. Upon its release in 1991, Apocalypse 91 shot to Number Four (Number One R&B), spawning the hits “Can’t Truss It” (Number 50 pop, Number 9 R&B, 1991) and “Shut Em Down” (Number 26 R&B, 1992). Greatest Misses reached Number 13 (Number 10 R&B) in 1992 and was criticized for its unexciting remixes. The same year, Public Enemy teamed up with thrash-metal band Anthrax for a successful update of “Bring the Noise” and a joint tour. They also opened for U2’s Zoo TV Tour.

Public Enemy returned in 1994 with Muse Sick-N-Hour Mess Age, which included lyrics critical of the fast-rising gangsta-rap genre and its frequent glorification of violence, drugs, and money. But, like those of other older rap artists, the album debuted fairly high on the chart only to quickly fall in sales (Number 14 pop, Number 4 R&B, 1994).

Beginning in 1991, Flavor Flav had some run-ins with the law. That year, he was convicted of assaulting his girlfriend and served a 20-day jail sentence. In 1993, he was charged with attempted murder when he allegedly shot at a neighbor in a domestic squabble; he chose to undergo drug rehabilitation, and the charges were dropped.

By 1996, Chuck D founded the Sony-supported Slam Jamz rap label, created the Rapp Style clothing company, and released his first solo album, The Autobiography of Mistachuck. The following year he published a book, Fight the Power: Rap, Race and Reality, and soon reconvened the original lineup of Public Enemy to record the soundtrack album to Lee’s 1998 film He Got Game. The project brought the group renewed visibility: The album reached Number 26 (Number 10 R&B), while the title track hit Number 78 on the R&B singles chart and won regular rotation on MTV. Chuck D closed the ’90s as a typically outspoken champion of Internet distribution of music, even making Public Enemy’s 1999 album There’s a Poison Goin’ On available first as a low-cost download.

During the 2000s, PE members stayed visible, with Chuck D lecturing on the college circuit and hosting a talk radio show and Flava Flav becoming a reality TV superstar with Flavor of Love. The group found time to put out four studio albums; none sold well but each was strong in its own way — especially Rebirth of a Nation, a collaboration with producer-rapper Paris, whose hammering beats sound straight out of 1990, and How You Sell Soul to a Soulless People Who Sold Their Soul?, which featured a heavier, more expansive sound. ~ Evan Serpick

Ask the price of Public Enemy and availability for free at info@room5.agency