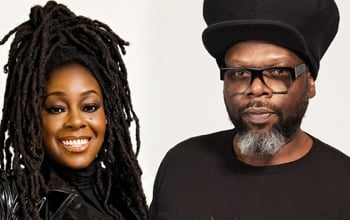 Soul II Soul (UK)
Back to Life (However Do You Want Me), Keep on Movin’, Get a Life

Avowing a positive and multicultural philosophy with their “funky dred” logo and the catchphrase “A happy face, a thumpin’ bass, for a lovin’ race,” Soul II Soul started spreading the similar ideals of London sound system culture across the globe at the end of the 1980s. At a time when the highly mechanized sound of new jack swing was dominating contemporary R&B, the group — led by producer, songwriter, and occasional vocalist Jazzie B — found a way to synthesize breakbeat-driven hip-hop and house music with the elegant dancefloor R&B of disco-era groups such as Barry White’s Love Unlimited Orchestra, MFSB, and Chic. The two biggest hits off Soul II Soul’s debut Club Classics Vol. One (1989), “Keep On Movin'” and “Back to Life (However Do You Want Me),” both powered by the silken voice of Caron Wheeler, turned the group into chart-topping stars at home and abroad. The latter also made them Grammy winners. Soul II Soul’s output since then is highlighted by a second number one U.K. album, Vol. II: 1990 – A New Decade (1990) and the number three hit Volume III: Just Right (1992), plus 11 additional U.K. Top 40 singles, each one featuring a different lead voice.

Jazzie B (Trevor Beresford Romeo) and Daddae Harvey (Philip Harvey) ran their first sound system in their early teens. They moved crowds with reggae before expanding their sets to incorporate soul, funk, and jazz, and in the mid-’80s reached full flight with an inclusive Sunday-night residency at the Africa Centre in Covent Garden. In 1988, Soul II Soul branched out from sound systems and pirate radio to wax with “Fairplay,” their debut for Virgin’s 10 subsidiary. Jazzie B co-wrote and co-produced the track, also co-produced by Nellee Hooper (Maximum Joy, the Wild Bunch) with co-writer Rose Windross featured as lead vocalist. Before the end of the year, the group followed up with the Do’Reen showcase “Feel Free,” written and produced by Jazzie B and Hooper. The singles respectively reached number 63 and 64 on the U.K. pop chart.~by Andy Kellman(allmusic.com)

Ask the price of Soul II Soul and availability for free at info@room5.agency