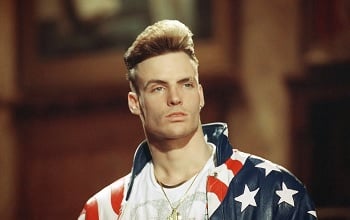 Robert Matthew Van Winkle (born October 31, 1967), known professionally as Vanilla Ice, is an American rapper, actor, and television host. Born in South Dallas, and raised in Texas and South Florida, Ice released his debut album, Hooked, in 1989 on Ichiban Records, before signing a contract with SBK Records, a record label of the EMI Group, which released a reformatted version of the album in 1990 under the title To the Extreme which became the fastest-selling hip hop album of all time[6] and contained Ice’s best-known hits: “Ice Ice Baby” and a cover of “Play That Funky Music”. “Ice Ice Baby” was the first hip hop single to top the Billboard charts and has been credited with helping to diversify hip hop by introducing it to a mainstream audience.

Although he was successful, Ice later regretted his business arrangements with SBK, which had paid him to adopt a more commercial appearance to appeal to a mass audience and published fabricated biographical information without his knowledge. Soundtrack appearances and a live album, Extremely Live, continued the success, but a second mainstream studio album, Mind Blowin’, featured an image change that saw a massive drop in popularity for Ice. After surviving a suicide attempt, Ice changed his musical style and lifestyle. While his later, less mainstream albums, including Hard to Swallow, Bi-Polar and Platinum Underground, failed to chart or receive much radio airplay, Ice gained an underground following. In 2009, Ice began hosting The Vanilla Ice Project on DIY Network. His latest album, WTF – Wisdom, Tenacity & Focus, was released in August 2011. After that, Ice signed to Psychopathic Records.~Wikipedia

Ask the price of Vanilla Ice and availability for free at info@room5.agency