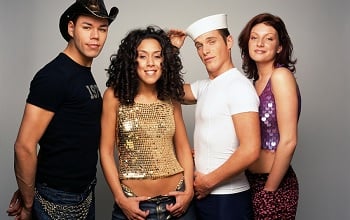 The Vengaboys were formed from DJ Danski and DJ Delmondo, Dutch, who toured Spain and Ibiza in a bus between 1992 and 1997, bringing “provocative grooves and sexy lyrics” to beaches for impromptu and illegal dance and beach parties. During 1995-96, four dancers/singers (Roy, Denice, Kim and Robin) – who had been regular guests at the beach parties – were added and the enlarged troupe toured beaches throughout Europe. Initially the new foursome worked as dancers to ‘spice up’ the DJ sets.

The act’s first single “Up & Down” was released in March 1997 in selected countries (Germany, France, Italy, Scandinavia and Israel), becoming a huge success in Europe (e.g. making the top 5 in The Netherlands, Denmark, France and Spain), before making its way over to America. The UK really caught the ‘Venga bug’, with combined sales of the act’s first 4 singles – “Boom Boom Boom Boom” (reached #1); “We’re Going To Ibiza” (#1); “Up & Down” (#3) and “We Like To Party” making nearly 2 Million. “We Like to Party!” is used in a Six Flags ad campaign featuring an old man dancing to the tune and picking up passengers. With global sales of over 10 Million singles, and 5 Million copies of their first album, Vengaboys have proved to be the most commercially successful Dutch group in history.

One of the band’s particularity was that they were always wearing a special outfit. The front lady Kim Sasabone (April 1st 1974 from Salvador) always appeared wearing a sexy camouflage outfit. Roy Olivero-Den Burger (aka Roy Darman, born 31 July 1975, coming from Trinidad), then later his replacement Donny Latupeirissa, were dressed as a cowboy. Denise Van Rijswijk (born October 20th 1978, dancer from the Netherlands) wore a disco outfit. Robin Pors (born January 1st 1978) then Yorick Bakker (born July 10th 1976) played the role of a sailor.

Ask the price of Vengaboys and availability for free at info@room5.agency